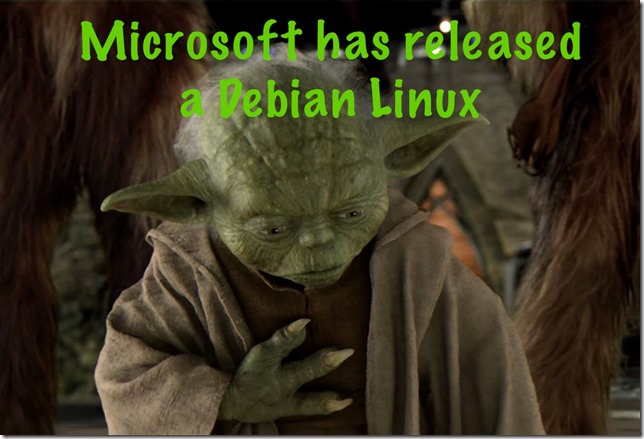 Put down your coffee gently. Microsoft has today released a homegrown open-source operating system, based on Debian GNU/Linux, that runs on network switches.

The software is dubbed SONiC, aka Software for Open Networking in the Cloud. It’s a toolkit of code and kernel patches to bend switch hardware to your will, so you can dictate how it works and what it can do, rather than relying on proprietary firmware from a traditional networking vendor.

It also pits Redmond against white-box network operating systems from the likes of HP, Dell, and Cumulus Networks.

SONiC builds upon the Windows giant’s Linux-based Azure Cloud Switch (ACS) operating system that we learned about in September.

ACS is the brains of switches in Microsoft’s Azure cloud: the code can run on all sorts of hardware from different equipment makers, and uses a common C API – the Switch Abstraction Interface (SAI) – to program the specialist chips in the networking gear. This means ACS can control and manage network devices and implement features as required regardless of who made the underlying electronics.

This underlying hardware must therefore implement the SAI, an API that Microsoft contributed to the Open Compute Project (OCP) in 2015. The OCP, launched by Facebook in 2011, encourages hardware manufacturers to produce generic gear to the project’s open standards and specifications so large organizations can buy the machines cheaply in bulk and use software to customize and control the gear as they wish.

Redmond – backed by Arista, Broadcom, Dell and Mellanox – now hopes to contribute ACS’s sibling SONiC to the OCP so organizations can pick and choose their switch hardware and shape their networks as needed using Redmond’s software.

"SONiC is a collection of software networking components required to build network devices like switches," said Azure CTO Mark Russinovich, who will give a keynote at the OCP Summit in San Jose, California, in the next few minutes.

"Together with SAI, SONiC will enable cloud operators to take advantage of hardware innovation, while giving them a framework to build upon open source code for applications on the network switch.

"We believe it’s the final piece of the puzzle in delivering a fully open sourced switch platform that can share the same software stack across hardware from multiple switch vendors."

SONiC is available for download now from Microsoft’s Azure GitHub repo under a mix of open-source licenses including the GNU GPL and the Apache license.

Today’s news follows Microsoft’s other bombshell this week: a port of SQL Server for Linux, due out in 2017. This is all extremely surprising given the Windows giant was hell bent on destroying Linux until very recently.

Now, according to Russinovich, more than 25 per cent of virtual machines running on Azure are Linux-powered, up from 20 per cent six months ago.

Redmond fans insist their favorite IT giant has turned a new leaf, that it no longer likens open-source to cancer and communism, and that it now truly loves Linux. Those of us who found themselves on the business end of Microsoft in the 1990s will be thinking of the old words from a nearly forgotten age. Embrace. Extend… ®

Russinovich has blogged about SONiC here.

Meanwhile, Microsoft has said it "has no plans to sell SONiC to customers or provide any network engineering or development support." It also stressed that "SONiC is a collection of networking software components required to have a fully functional L3 device that can be agnostic of any particular Linux distribution. Today SONiC runs on Debian."