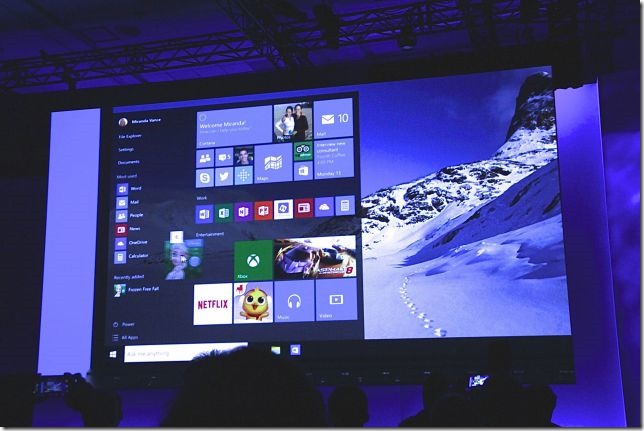 While Windows 10 is designed to run across phones, tablets, PCs and more, Microsoft confirmed Wednesday that it plans to package up the software slightly differently for separate markets.

Windows 10 will be released in at least seven different flavors if you count the versions offered for home, education, enterprise, internet-of-things devices as well as standard and enterprise editions of Windows 10 for phones and small tablets.

To be clear, apps created for Windows 10 will run on all the flavors, with some tailoring needed to make apps work across different screen sizes. The decision to offer different editions has more to do with how Microsoft sells its software — it still likes to make more money from businesses than consumers and having different packages helps them do that.

Microsoft has traditionally had a large number of different flavors of Windows, over the years offering editions like Starter, Home, Home Premium, Professional and Enterprise, each with a slightly different mix of features.

That said, Microsoft really wants existing devices running Windows 10 and is offering a free upgrade to all customers with a machine capable of running the software. Microsoft says the free offer will be available for one year after the software is released (but once you upgrade, it remains free.)

The one big technical difference is on the version of Windows 10 for phones and small tablets as compared to the versions for PCs and larger tablets. Only the mobile versions will support ARM-based chips, like those from Qualcomm and Nvidia. The standard versions of Windows 10 for PCs and larger tablets will require standard x86 processors from Intel and AMD.

Windows chief Terry Myerson told recently that the decision was made because consumers buying larger devices have an expectation that all their Windows apps will run. ARM chips support the new-style programs that debuted with Windows 8, but not apps designed for the classic desktop of Windows 7 and prior versions.

The move brings to a close the era of Windows RT — the separate version of Windows 8 that ran on ARM processors. It ran on Microsoft’s Surface as well as tablets and convertibles from several other makers, but consumers reacted poorly to the notion of running what appeared to be full Windows on something that looked like a PC yet couldn’t run older Windows apps. Even Microsoft’s own Surface switched to an Intel chip this time around to offer broader compatibility.

Another big difference is around timing. Windows 10 will show up on PCs and tablets starting this summer, while phones running the new operating system won’t come until the fall.

Windows 10 is designed to merge the new style of applications that debuted in Windows 8 with the classic Windows desktop feel from Windows 7 and prior versions. It also boasts the Cortana personal assistant, a biometric sign-in feature dubbed Windows Hello and a new Web browser called Microsoft Edge (previously Project Spartan).

Getting customers to Windows 10 is critical to attracting developers for modern-style apps that run on Windows phones and tablets. Microsoft has promised developers and Wall Street that it will have a billion devices running Windows 10 within three years.

“Because we have built Windows 10 to be delivered as a service, this milestone is just the beginning of the new generation of Windows,” Microsoft VP Tony Prophet said in a blog post. “Starting this fall, customers can expect ongoing innovation and security updates for their Windows 10 devices, including more advanced security and management capabilities for businesses.”