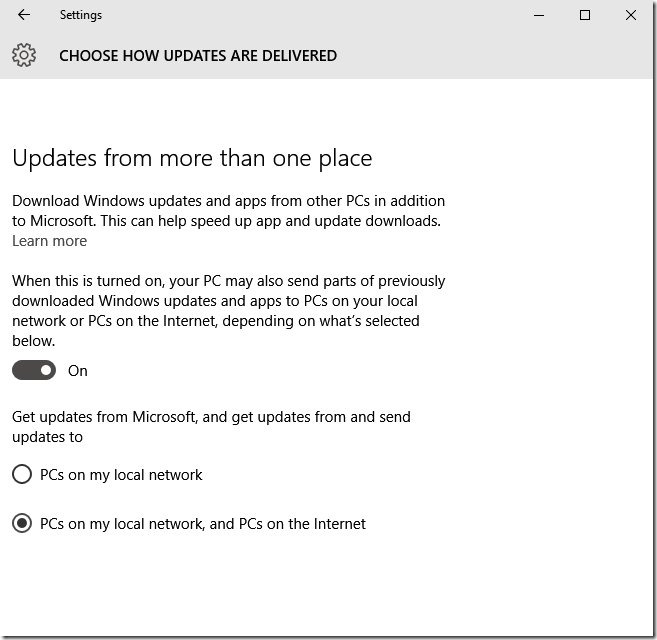 Now that Windows is a service (WaaS), which means it will constantly be updated rather than have big regular updates, Microsoft has put some features in to Windrows 10 to speed up the delivery of those updates. One feature that may have escaped your notice is called Windows Update Delivery Optimization (WUDO). This feature isn’t mentioned in the "Get Started" app but needs to be searched for in the documentation.

This new Windows 10 feature works in a similar way to torrent technology which uses a peer to peer network to distribute files quickly over the internet. The torrent system works so effectively because as files are downloaded, parts of the file are also uploaded to the next computer and so on. In order to receive, you have to give a little back.

Windows 10 works in a similar way with the WUDO feature. If your computer has downloaded an update but a computer on your local network hasn’t, then your computer will send that data to the other computer. It’s faster than updating over the internet. To change how Windows distributes downloads, do the following:

Also, by default, the WUDO is set to send updates to computers over the internet (similar to torrents). Happily, Microsoft assures that no personal information is sent in the transfer and no changes are made to any files on the PC. The feature will also only use limited and unused bandwidth and if your connection is set to metered, then it won’t do it at all. However, if you have a capped Wi‑Fi connection, you should make sure Windows 10 sees it as a metered connection by doing the following:

While this feature will help get Windows update faster and that’s a good thing, Microsoft needs to be wary about eroding any positive feeling Windows 10 has built up. To do that, it should at least highlight this option during the update process.