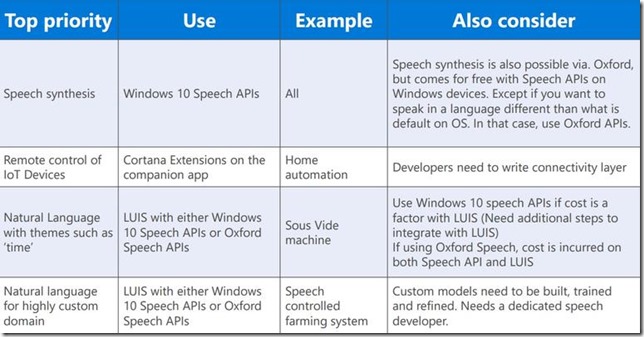 Microsoft has been stepping up its game around connecting its Azure cloud services to Internet of Things (IoT) devices. But few may realize the company also is simultaneously working to bring its various speech capabilities to IoT devices, too.

Microsoft provides IoT developers with various tools for integrating speech with their devices. There are built-in Windows 10 speech application programming interfaces (APIs) for tasks like dictating a simple message and Web search. There are natural-language services — known as Language Understanding Intelligent Service (LUIS) — that are part of Microsoft Research’s Oxford API set, and are available for non-Windows platforms, too. There’s Bing Translate. And there’s Cortana, Microsoft’s personal digital assistant.

Figuring out which of these tools is best for which kinds of tasks seemingly can be a bit tricky. Company officials provided a framework for guidance during WinHEC, listing some potential scenarios, like controlling a sous-vide machine by voice (using a combination of LUIS with Windows 10 or Oxford Speech APIs), and controlling a robot using voice (using Windows 10 local speech APIs).

In the home automation/device control example, Microsoft showed how a user could check whether her/his garage door is closed with voice queries without having to use a phone or tablet.