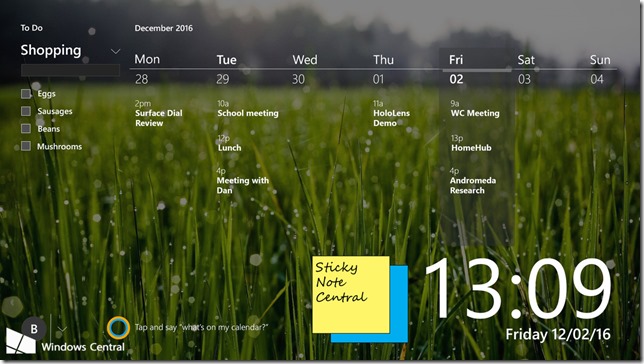 In what might be the most exciting part of this whole project, Microsoft is working on bringing the connected "smart home" to Windows 10 with Home Hub. The goal is to make Windows 10 the central hub for all your smart home devices, including lights, doors, locks and more. With Cortana integration allowing you to use your voice to toggle and control the smart devices in your home, the picture for Home Hub becomes complete: it brings Windows 10 to the center of your entire home.

Microsoft is building a dedicated "Connected Home" app that will make adding smart devices to your home easy; with an overview of all the smart devices in your home and options to turn them on and off, configure them, and more. You’ll also be able to group devices to individual rooms; for example, you could have Hue lights 1, 2 and 3 grouped under the Bedroom tag and tell the Home Hub to "turn off the bedroom lights". This app will work much like most other smart home apps, except this one will have deep integration with Windows 10.

Home Hub is a massive project for Microsoft, with a lot of it planned across for Redstone 2, 3 and 4. It’s unclear when we should expect to see the whole set of Home Hub features show up for consumers. Some sources have suggested the first batch of major Home Hub bits will arrive with Redstone 3, with smaller features such as Family Desktop showing up sooner with the Creators Update.

Although Microsoft has internal projections for this stuff, that doesn’t make it immune from delays or even cancellations. That’s a frequent occurrence at any tech company of Microsoft’s size — internal projects don’t always work out, and sometimes they rise and fall entirely without public knowledge of the plans.

Most of the sources we’ve spoken to have all said a lot of the Home Hub stuff had been delayed for more important changes and improvements that need to be made to Windows 10, which is understandable. No single source has explicitly said that the big Home Hub stuff has been canceled, but we have heard that it might be a while before any of the interesting stuff begins to show up in public.