Not every SQL statement can be converted to LINQ, but Linqer covers many different types of SQL expressions. Linqer supports both .NET languages – C# and Visual Basic.
Because LINQ is a part of the C# and VB languages, it is sensitive to data type conversion. Linqer performs required type castings in the produced LINQ statements.
It can convert the most usable SQL Server functions. The full list of supported MSSQL functions can be found here.
You need to have Microsoft .NET Framework 4.5 ,Microsoft .NET Framework 4.0 , or Microsoft .NET Framework 3.5 installed on your computer to be able to use Linqer. Visual Studio needs to be installed, in order to use the SqlMetal tool to generate LINQ to SQL model files or the EdmGen tool to generate LINQ to Entities model files. 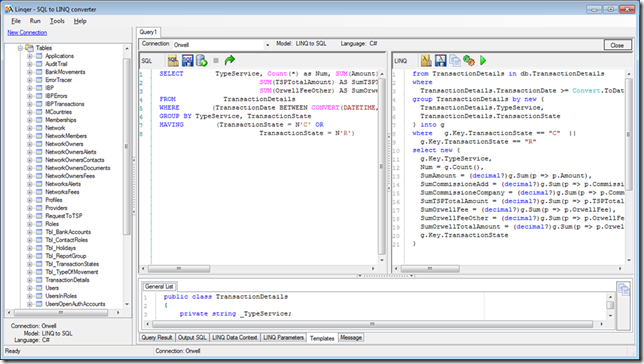