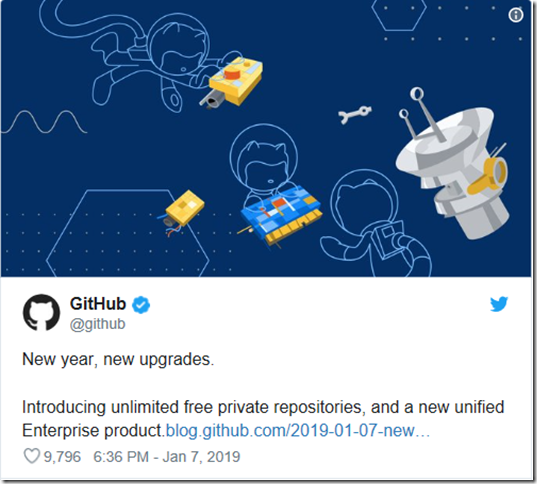 GitHub is by far the most popular way to build and share software. That said, one weakness of the platform is that it limits who can create private repositories – that is, software projects that aren’t visible to the broader public, and are shared only with a handful of pre-defined collaborators – to paying users.

Fortunately, that’s no longer the case, as GitHub today announced it was giving users of its free plan access to unlimited private repositories. This is great news for GitHub’s users, but there is a caveat, of course.

Private repositories on free accounts are limited to three collaborators apiece. So, while this might work for a small project (like, for example, a team competing in a hackathon), it isn’t particularly well-suited for actual commercial usage.

That was probably a deliberate move from GitHub. There’s little risk of the company cannibalizing its existing paid users with this new free offering.

Until recently, developers who wanted to create private git repositories without opening their wallets were forced to use a rival service – most frequently BitBucket. Today’s news, obviously, isn’t great for Atlassian’s flagship code sharing platform, but it does mean that coders aren’t forced to use two disparate code management services for their private and public projects

I also wonder what ubiquitous private repositories will mean for Github’s culture of self-exhibition and sharing.