Creating Wizard in ASP.NET MVC only

At times you want to accept user input in your web applications by presenting them with a wizard driven user interface. A wizard driven user interface allows you to logically divide and group pieces of information so that user can fill them up easily in step-by-step manner. While creating a wizard is easy in ASP.NET Web Forms applications, you need to implement it yourself in ASP.NET MVC applications. There are more than one approaches to creating a wizard in ASP.NET MVC and this article shows one of them. In Part 1 of this article you will develop a wizard that stores its data in ASP.NET Session and the wizard works on traditional form submission.

To develop a wizard in ASP.NET MVC you will use the following approach:

Now that you have some idea about the approach we will be taking for developing a wizard, let’s create a sample application that illustrates how this approach can be implemented. Begin by creating a new ASP.NET MVC application based on Empty template. Then right click on the Models folder and add an ADO.NET Entity Data Model for the Customers table of Northwind database. The following figure shows the Customer model class in the designer.

As you can see the Customer class has several properties. For the sake of creating the wizard let’s group them in three steps as follows:

Note that a few properties have been omitted from the wizard just to keep things tidy.

You need to create a view model class for each of the wizard steps outlined above. So, you need to add BasicDetails, AddressDetails and ContactDetails classes to the Models folder. These are simple POCOs as shown below:

As you can see the three classes namely BasicDetails, AddressDetails and ContactDetails contain only those properties that are relevant to the corresponding wizard step. Additionally, they use data annotations for basic validations. You can add more data annotations as per your requirement. For this example, the above attributes are sufficient.

Inside, the code checks the ModelState.IsValid property to determine whether the the model contains valid data. If IsValid returns true GetCustomer() is called to retrieve the Customer object from the Session. The CustomerID and CompanyName properties of the Customer object are set with the corresponding properties of BasicDetails object and AddressDetails view is returned. If there are any model validation errors the BasicDetails view will be returned.

The AddressDetails() method works on the similar lines as that of BasicDetails() and is shown below:

Then the code checks whether Next button was clicked. If so, IsValid property of ModelState is checked as before. If there are no model validation errors data from AddressDetails object is stored in the Customer object from the Session. The code then return ContactDetails view.

The ContactDetails() action method does the job of saving the newly added Customer to the database and is shown below:

If user clicks on Next button, model is checked for any validation errors using IsValid property. If there are no validation errors properties of Customer object stored in the Session are assigned values of the corresponding ContactDetails object properties. Then a Entity Framework context is instantiated and the Customer object is added to the Customers DbSet. Calling SaveChanges() saves the data to the database. RemoveCustomer() is then called so as to remove the Session object. Finally, Success view is returned from the method.

Next, add four views – BasicDetails, AddressDetails, ContactDetails and Success. The markup of BasicDetails view is shown below: 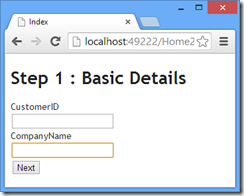 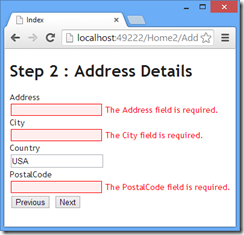 The final wizard step – ContactDetails – consists of form fields for ContactName, Phone and Fax. It has two buttons Previous and Finish. The markup of ContactDetails view is shown below:

As you can see the ContactDetails view posts to ContactDetails() action method of HomeController. Notice that this time nextBtn has a value of Finish since it is the last step of the wizard. The following figure shows ContactDetails in action: 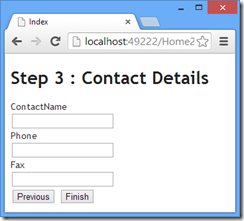 Finally, you need to add the Success view that displays a success method and has a link to run the wizard again. The markup of success view is shown below:

As you can see the ActionLink() helper renders an action link that points to the Index action method of HomeController. The following figure shows how the Success view looks like:

That’s it! You can now run the wizard and test whether it works as expected. In the second part of this article you will learn to create a wizard using Ajax techniques.