Weâ€™re excited to announce that CoreCLR is now open source on GitHub. CoreCLR is the .NET execution engine in .NET Core, performing functions such as garbage collection and compilation to machine code. .NET Core is a modular implementation of .NET that can be used as the base stack for a wide variety of scenarios, today scaling from console utilities to web apps in the cloud. To learn how .NET Core differs from the .NET Framework, take a look at the Introducing .NET Core blog post.

You can check out the CoreCLR sources, fork, clone and build. We have released the complete and up-to-date CoreCLR implementation, which includes RyuJIT, the .NET GC, native interop and many other .NET runtime components. This release follows from our earlier release of the core libraries, both of which demonstrate our strong commitment to sharing a complete cross-platform .NET implementation. 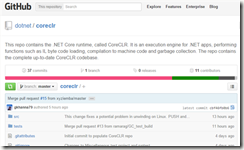 Today, .NET Core builds and runs on Windows. We will be adding Linux and Mac implementations of platform-specific components over the next few months. We already have some Linux-specific code in .NET Core, but weâ€™re really just getting started on our ports. We wanted to open up the code first, so that we could all enjoy the cross-platform journey from the outset.

Talking to the Team

The .NET Core folks spent some time in the Channel 9 studio, talking about CoreCLR and CoreCLR repo. Check out the conversation, below. The team will also be showing up for todayâ€™s ASP.NET Community standup. Weâ€™ll post the live link when we have it.

Taking a look at the coreclr repo

The CoreCLR repo is very similar in nature to the CoreFX repo, which many of you have been engaging with over the last few months. Weâ€™ll continue to evolve these repos together so that your experience feels natural across the fairly large codebase.

From a size perspective, the coreclr repo has ~ 2.6M lines of code. Within that count, the JIT is about 320K lines and the GC about 55k. We recently shared that the CoreFX repo is at 500K lines and only at about 25% of its eventual size. It’s fair to say that the two repos will total ~ 5M lines by the time .NET Core is fully available on GitHub. 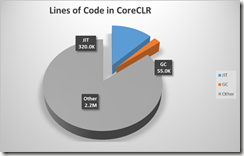 The one key difference between the two repos is that corefx is all C# and coreclr includes large collections of both C# and C++ code. The coreclr repo requires multiple toolsets to build both C# and C++ code, including tools that do not ship with Visual Studio. We took a dependency on CMake, an open source and cross-platform build system. We needed a build system that we could use on Windows, Linux and Mac and that could build for each of those targets. We looked around at the options, and also based on advice, selected CMake.

You can learn how to build CoreCLR from the CoreCLR Developer Guide. The team will be updating the guide over time, particularly as Linux and Mac builds become a reality.

We hope to see many community contributions to the codebase, too. We’re in the process of bringing more of our validation infrastructure to the open source environment to make it easier to make contributions. .NET Core supports a diverse set of .NET scenarios, so itâ€™s important that we have a rich set of tests to catch issues as early as possible.

Itâ€™s great to see .NET Core open source and cross-platform implementations, but you might be wondering what type of apps you can build with it. There are two app types that we are working on and that you can try today:

We want to make it possible to build the CoreFX and CoreCLR repos, and use the built artifacts with an ASP.NET 5 app. That’s not yet possible, for a few different technical reasons, but we’re working on it. It’s a strong goal to enable an end-to-end open source experience for .NET Core and ASP.NET 5. You should be able to build your forks with your own changes and use the resulting binaries as the base stack for your apps.

The console app type is a great way to kick the CoreCLR tires. It also gives you a very flexible base to build any kind of app you want. Almost all of our testing infrastructure is built using this app type. You can also build your own custom CoreCLR and run console apps on top of it.

At the moment, the .NET Core console app type is a useful byproduct of our engineering process. Over the next few months, we will be shaping it into a fully supported app type, including Visual Studio templates and debugging. We’ll also make sure that there is good OmniSharp support for console apps. We believe that many of you will build console tools for Windows, Linux and Mac. You’ll also be able to build tools that are cross-platform, that run on all 3 OSes, with just one binary.

Here’s a first console demo of .NET Core running on Windows, based on the open source CoreCLR implementation on GitHub. 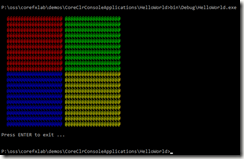 The easiest way to try out CoreCLR is via the prototype of the CoreCLR-based console application. You can get it from our new corefxlab repo. In order to use it, you can just clone, build, and run via the command line:

Of course, once you have cloned the repo you can also simply open the HelloWorld.sln file and edit the code in Visual Studio. Please note that debugging is not yet supported, but debuggers are only for people who make mistakes anyway, right?

You can also modify CoreCLR and make the Console app run against the locally built version of it. At this point, the build automation isnâ€™t that great but here is how you can do that manually with the sources we have today: