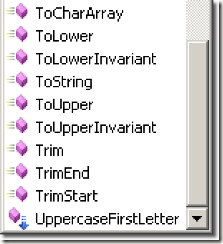 First, here is a custom extension method defined in a program written in the C# language. Generally, you will want to store your extension method class in a separate source file, such as “ExtensionMethods.cs” in your project.

Then: In the rest of your source code, you can invoke these extension methods in the same way as instance methods.

In the first part of the program, you can see an extension method declaration in the C# programming language. An extension method must be static and can be public so you can use it anywhere in your source code.

Tip: the extension method is called like an instance method, but is actually a static method. The instance pointer “this” is a parameter.

And: you must specify the this-keyword before the appropriate parameter you want the method to be called upon.

The only difference in the declaration between a regular static method and an extension method is the “this” keyword in the parameter list. If you want the method to receive other parameters, you can include those at the end.