“System.IO.FileNotFoundException” using controls from another assembly in Xamarin Forms on iOS.

I was building a Xamarin solution with my components like that: 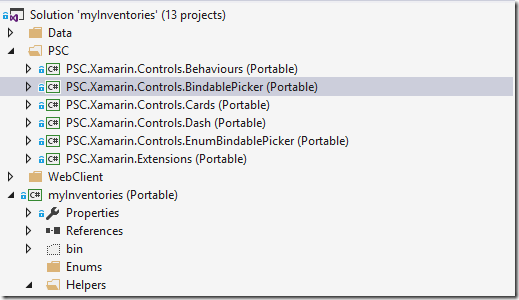 All my components (PSC.Xamarin.Controls.*) are working fine in other solutions.Always fine for Windows or UWP solutions. A problem was born when I started to deployed my solutions on iOS. When on the app I opened a page with my controls I always received an error like:

System.IO.FileNotFoundException: Could not load file or assembly ‘PSC.Xamarin.Controls.BindablePicker’ or one of its dependencies. The system cannot find the file specified.

I can check my references and deployment settings in all ways, it turns out there’s probably a bug in Xamarin Forms’ iOS implementation. If you use controls and only controls from a PCL or dll that does not contain other code that is called from the app, apparently Xamarin on iOS ‘forgets’ to load/deploy the assembly (or something like that). But there is a work around.

The work around is as simple as it is weird. You go the iOS app’s AppDelegate class, and you add a reference to your class(es). If this is not enough, in the FinishedLaunching function you have to add a new instance to your control as in the following example: