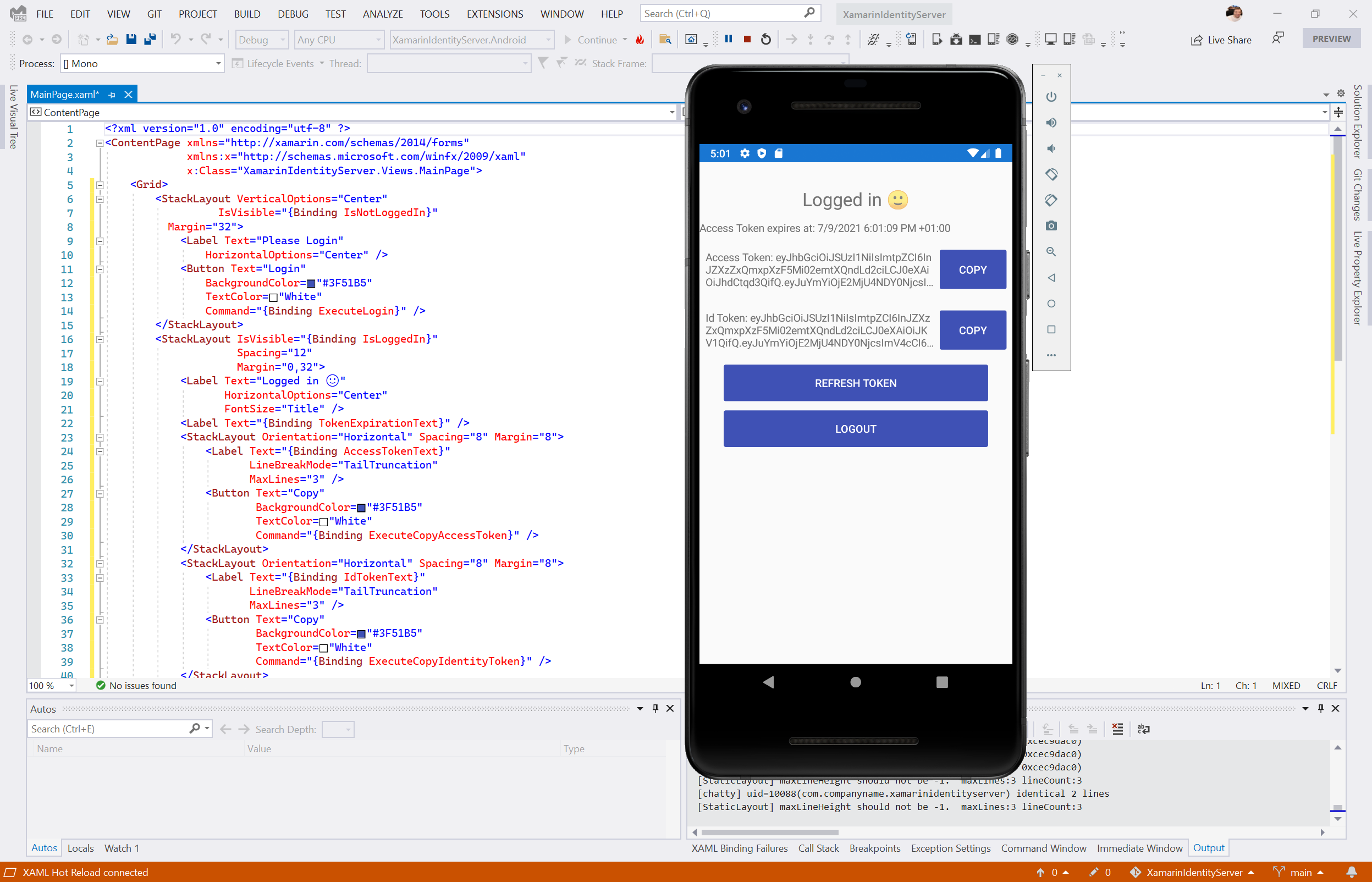 The source code of this project is available on GitHub.

So, when overhearing people talking about authentication, it almost feels like there is something mystical to it, almost like a secret club with handshakes unknown to outsiders. At least, that was how I remember it when I started looking into adding an authentication layer to an app I was working on at the time.

As with many things, the more time you invest, the more mysteries suddenly seem to make sense. And before you know it, you are cruising through the authentication-related tasks. Now, authentication is not a new concept, but it is one that you might have heard is best to follow a standard. Use a proven library and not implement your own. And we will follow those words using OpenID/OAuth2 for authentication in a mobile Xamarin Forms application.

Then, OAuth2 is a standard that provides different flows of how the user can authenticate himself. The recommended flow when using a mobile app is the code flow. Which looks like this if we plot it on a diagram:

You can see that the authentication is ruffly split up into four steps.

You might have noticed that the user authenticates using a browser window. This is by intent. The code flow does not allow the user to log in using a native view in the app. The reason being that this flow ensures that the username and password are never seen by the client (except the browser, which is part of the OS system – aka we trust it). You could enable using a native login view with the Resource Owner Password Credentials (ROPC) flow.

This is also an attack vector. Suppose someone makes a fraud duplicate of your application and tricking users into entering their credentials. The fraudulent app could store those credentials in-between. You just got to enjoy those tin-foil-hat moments when doing security. In other words, using the code flow does not give an attacker that opportunity and therefore is the recommended option for mobile clients.

With that brief introduction to the authentication flow and why the code flow is recommended, let’s start assembling the pieces of code, bringing the chart to life.

This step aims to get a code that will allow us to request a token from the identity server. Understanding the OAuth2 specs to build such a client from scratch is no small feat. Luckily Dominick Bayer and Brock Allen have done a lot of heavy lifting for us on the client-side by providing us with the IdentityModel.OidcClient library.

The library offers the OidcClient class, which will significantly simplify the calls to authenticate our user. We will require a few parameters to make the request:

The parameters described above usually differ from app to app. They probably will even vary from environment to environment, i.e. staging vs production. The parameters get defined on the Identity Server, e.g. the backend and have to be inserted accordingly on the client.

Authority: This URL points to the root URL of the identity server. The OidcClient library knows by a convention which endpoints it has to call for the authentication and requesting the tokens later on by calling the https://path-to-the-identity-server.ch/.well-known/openid-configuration.

There is one additional parameter that did not get mentioned before: The Browser parameter. Since the code flow will open a browser window for the user to log in, we need to configure the browse.

Luckily we can use the Web Authenticator from the Xamarin.Essentials package which will provide exactly this feature. There are some getting started steps required, which you find in the official Microsoft docs. To invoke the All that we have to do is embed it in an IBrowser interface provided by the OidcClient library

The main interaction point is the InvokeAsync method. Here we use the Web Authenticator to open a browser. The end URL passed to the server is the RedirectUrl we defined earlier in the options. This is a deep link back into your application, which is also part of the configuration of the Xamarin.Essentials Web Authenticator functionality. The response is a WebAuthenticatorResult. We are parsing the result into an HTTP request parameter string which we will use to request the tokens. We add the request string to the browser result. If anything goes wrong, we will return an error in the same object.

After all this configuration, we can start the authentication process by invoking the following line of code:

Starting the authentication will invoke our browser implementation WebAuthenticatorBrowser. Should the browser return a result, the OidcClient will automatically request the tokens from the server. If, however, there was an error at any stage, the result would provide us with the information. I.e. an exception occurred while executing the browser code.

Given a valid response from the server. Add the access token to a HttpClient header:

Every call using this HttpClient will now provide the server with an access token. Should you want to remove the authentication header from your client, you can set it to null.

So, an access token usually is only valid for a short time. How long depends on what on the server setting. The client receives the date and time when the access token expires. Either by parsing the ID Token (which is a JWT Token), or we get a handy property AccessTokenExpiration on the response. The default with the identity server is 60 minutes. This would imply that the user will have to go through the authentication every hour.

Do you remember a mobile app demanding this of you? Probably not. And if there were, you would probably be looking for an alternative. Luckily there is a way to prevent your user from having to provide the credentials over and over again. You can request a refresh token by adding the offline_access scope (this has to be allowed by the server). Then you can request a new access token from the server without asking the user for any information:

So far, we have received tokens after the user has logged in. Further, we looked at renewing to. We also saw how tokens could be kens without any interaction from the user’s side. A good thing with this token-based approach is that your app will never be responsible for handling the user’s credentials.

Nevertheless, it can make sense to store the tokens, i.e., ensure the user does not have to log in after restarting the app. Since tokens impersonate a user, we should consider keeping them in a secure location. Again the Xamarin.Essentials library will be of great help, more precisely, the Secure Storage feature of the library. It enables apps to store information encrypted or depending on phone and platform, even on a secure storage module.

I hope that authentication has lost some of its mystery. The process may seem a bit complex at first, but it is there to ensure that our users’ credentials do not fall into the wrong hands. We also saw that with OidcClient and Xamarin.Essentials there are libraries ready to use and help to implement the Open Id / OAuth2 standard in your Xamarin app.

One thought on “Authentication in Xamarin Forms with IdentityServer”